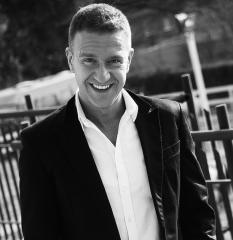 Born in Rome, he begins his acting studies attending the "Velia Cecchini" theater workshops, held by the director Giovanni Nardoni. The detailed study of the realist method with John Strasberg and the short-term course in Great Britain with the Charioteer Theatre, where he improves his knowledge of the Shakespearean repertoire, are crucial for his education as an actor. He has been vocal trained by prestigious teachers, as Jana Mrazova and Anna Maria Di Marco, tap-dance and musical repertory trained by Ann Amendolagine. He receives the writing technique from Vincenzo Cerami (LA VITA E' BELLA), joining his creative writing workshop at The Sapienza University in Rome.

In the early 2000s he takes part to several drama productions directed by Nardoni, such as "Teleny", "Odyssey" and "Iliad". Later, he dedicates himself primarily to musical theater and we find him serving "The Full Monty", directed by Gigi Proietti, "Lady Day" - with international star Amii Stuart - and "My Fair Lady" with Corrado Tedeschi and Gianfabio Bosco, directed by Massimo Romeo Piparo.

Under the direction of Gino Landi he plays the role of the grandson of Italy's most famous mouse in "Geronimo Stilton Supershow" and then, under same director, he plays Mister Caderousse in "The Count of Montecristo".

In 2006 he is cast as Mr. Jefferson in "Rent" by Jonathan Larson, produced by Pavarotti International, and later on he is once again directed by Piparo starring in the role of Dexter Haven in "High Society", with Vanessa Incontrada, Francesca Taverni and Cristian Ruiz.

From 2009 to 2011, for more than 500 performances, he plays Cogsworth in "Beauty and the Beast", first resident show in Italy (produced by Stage Entertainment) and one of the biggest turnouts in Italy since the postwar period.

In 2011 he is highly appreciated playing the role of Bernadette in "Priscilla, queen of the desert, The musical", stage adaptation of the 1994 movie in which the same role is played by Terence Stamp. Thanks to this opportunity, on November 10, 2012, he receives the Sandro Massimini National Prize for the following reasons:

"Coming along at the Politeama Rossetti on a globetrotter glittering pink bus named Priscilla, queen of the desert, the public appreciated the class and the inspiration of Simone which gave a significant contribution to the incredible success of the show… The acting and singing abilities of Leonardi find their full consecration in the ironic and dreamy character of Bernadette, in a visionary and intruiguing show of drag queens, with an unanimous and enthusiastic acclaim from audience and critics."

For the same role, he wins the Musical Award (2013 edition) as Best Actor, with national star Loretta Goggi, Best Actress.

In the summer of 2014 he plays Joe in "Sunset Boulevard", with Italian diva Donatella Pandimiglio, for the first time in Italy at the Todi Festival.

Once again, in 2015, he takes part in a Disney musical, "Newsies", cast as Joseph Pulitzer.

In 2016 he debuts in the tv series "L'ispettore Coliandro", in the role of Ursula in the third episode ("Salsa e Merengue") of the fifth season, and at pictures with the movie "Al posto tuo", directed by Max Croci.

In the same year he is cast in the musical "West Side Story" - 20 years after its Italian premiere - as lieutenant Schrank, directed by Federico Bellone.

In 2017 he is four-stars reviewed playwright with "To be or not to be Scarlett O 'Hara" at the Etcetera Theatre, a one-act imaginary fight between Vivien Leigh and Laurence Olivier after she finds out she has been chosen to play the leading role in "Gone with the wind".

His activity in London continues playing the role of John Robinson in the new musical "Free Solo", premiered during the Camden Fringe festival at the Hen and Chickens Theater.

Alongside his acting career, he carries out his voiceover activities for TV shows, movies, TV series, documentaries and cartoons.

Furthermore, he also works on Italian translations and adaptations of musical shows such as "The Last Five Years" by Jason Robert Brown.

The skills acquired over the years lead him to test himself as director of different performances and shows, including "Amore e Musical" and "La strada per il Paradiso" (of which he is also the author), staged at the Opera Theatre of Sanremo, and "R & G: tutto questo è già successo", site-specific show at Villa Lais with the sponsorship of the City of Rome. In 2014 he is associated director of the Italian version of "Dirty Dancing", based on the English production of the musical directed by Sarah Tipple. In 2016 he directs the play "Il covo dei ladri", an Italian adaptation of "Den of thieves" by Stephen Adly Guirgis, also taking care of the translation of the text together with Claudio Arresta.

Since 2012 he works as a teacher in different acting schools such as the CAFT (High Theatre Training Center) of Rome, the MTS (Musical! The school) in Milan and TMA (Turin Musical Academy) of Turin. In 2014 he is also selected “intuitu personae” to teach a course on "Public speaking" at The Sapienza University of Rome. He firmly believes that teaching the arts from an early age is necessary; that's why he's been teaching to children since 2013 at "Musical Weekend" and "Summer Class", directed by Francesca Cipriani and MTDA of Fiumicino, where children aged 8 to16 can begin an intensive path with a complete and triple threat preparation which terminates, as part of the academic program, the staging of a real musical theater show.